Order before December 18 for delivery before Christmas (US-only). Bolt-action click pen made with wood from WWII history.

This limited edition pen is crafted using the original teak decking from the USS North Carolina, one of the most decorated ships in the WWII Pacific Fleet. The 1941 Series is an edition of 1000 pens with a unique serial number engraved on each. One of two different pen designs in this series, the bolt-action is a retractable ballpoint pen. All Allegory pens are handcrafted and guaranteed for life.

The USS North Carolina was commissioned in 1941, participated in every major engagement in the Pacific theater during World War II, and ultimately became one of the most decorated ships in the Pacific fleet. From Guadalcanal to Iwo Jima, its contribution to history simply can't be measured.

Today it continues to serve as a museum ship, and a few years ago its original teak deck was replaced to support that new role. We purchased several pieces of the original deck from the museum so we could give them a new mission, providing you with daily inspiration as a writing tool.

Packaging represents 1/3 of municipal waste. We keep ours simple to save space, but make it by hand so that you know what's inside is loved. Your pen will include:

It's a really nice pen. The bolt action works well. It's a little on the heavy side but I like it. And the history of the wood is really cool and catches everyone's attention.

My Grandfather was a Plankowner of this ship, meaning he was part of the commissioning crew. His battle station was inside the hatch of port side gun of the rear turret, where he loaded 50 lb sacks of gunpowder and 2200 lb shells.

To have an amazing pen from the original teak decks where he walked, fought, saw the world at war, and survived... it's hard to put it to words. Thank you.

PS. "The Showboat" was torpedoed Spt 15th, 1942, not seriously damaged it headed back to Pearl Harbor for repairs, at which point he left the ship for a new duty out of San Francisco.... where four months later he met a special woman, that ended up my grandmother. A story to write about indeed.

Attention to detail. Metal and wood fitted perfectly. On top of that the history behind the wood makes this a well rounded package.

Amazing pen. Couldn't be happier with my purchase.

This pen first got my attention because of its bolt action. It is not common, thus original, and extremely solid in its action. I also love wood, which finalized my decision about this purchase. What I received is up to what I expected: a well and solidly-made pen, very original and beautiful. As experienced before with what I acquired from Allegory Goods, this is a product designed with the end user in mind which marries functionality, quality and nice details such as the added pen sleeve and a removable clip with a tablet friendly soft head. 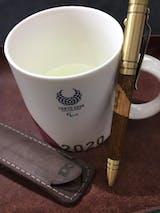